Sriram Khattar
Chief Executive Officer
DLF Rental Business
Sriram Khattar has been associated with DLF Group since 2007 and was appointed as Chief Executive Officer of DLF Rental Businesses last year in June.
Khattar is an accomplished professional with rich and diverse experience of over 30 years in real estate, healthcare and services businesses. His core competencies include strategy formulation and implementation, corporate finance and managing businesses. Currently, he has the charge of managing the rental businesses of DLF in office complex infrastructure and retail.
Continuing eight years stint with DLF, Khattar has successfully taken on a number of leadership roles of increasing responsibilities. In his previous role, he was responsible for risk management that included the heading compliances processes, internal audits, managing mergers and acquisitions processes and collaborations.
Under his leadership, 17 DLF office complexes were honoured with ‘Sword of Honor’ by the British Safety Council making DLF the first and only real estate organisation in the world (In Office Complex Infrastructure Development and Operation) to earn this honour. DLF was conferred with this Safety Excellence Award for maintaining the highest standard in occupational health and safety.
Sriram Khattar is a fellow member of Institute of Chartered Accountants of India. Prior to his association with DLF, Khattar has worked in healthcare, services businesses and corporate finance segment in various leadership roles with blue chip companies like ITC and A.F Ferguson & Co. 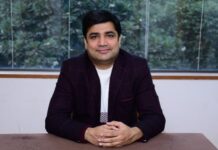