Kaushal Dugar, Founder & CEO at Teabox, speaks to Progressive Grocer about how his Siliguri-based online start-up is turning the traditional tea-retailing model on its head through vertical integration of sourcing, branding and distribution of teas

The beginning of the year 2016 has been particularly good for Teabox following the seed funding from the Tatas. What do you think got Ratan Tata interested in Teabox?

Well, for one, the opportunity is huge for us. The global tea market is currently valued at over US dollar 40-60 billion. On the demand side, in general, we are seeing that customers are trading up to a better lifestyle. Consumers, the world over, have more discretionary wealth available to spend on premium goods than ever before. And this is no fad; the phenomenon is driven by the fundamentals, long-term forces on both demand and supply sides, forces that will keep it thriving for years to come.

We have also been obsessively focussed on being able to deliver an unmatchable experience to our consumers. In fact, one of the investors, Robert Bass of Keystone Group LP, first discovered Teabox as a tea drinker. He is a devout tea drinker and he loved the product so much that he went on to participate in the first round of investment we have had so far. Th ere could not have been a bigger testament to the quality of our product.

Moreover, over the last three years, we have built a great team consisting of passionate and self-driven individuals who believe in our vision. And we are glad that our investment partners are also fully on board with our vision for this category.

Also, having seen the industry from such close quarters, I could see that there was an immense opportunity that was waiting to be tapped. Additionally, the fact that we are witnessing a concomitant change in the attitudes of consumers caused by the social shifts and changes in the demographics, is a source of strength for the tea category.

We assume Mr Tata liked the vision of Teabox, and the way Teabox has been disrupting the industry, with its innovations in technology and the supply chain approach.

How will Mr Tata’s investment influence the future course of Teabox?

Getting direct access to an individual who has been admired for his vision and business acumen in scaling the Tata Group to a global level is an achievement and we hope it would help us to learn a lot from him. 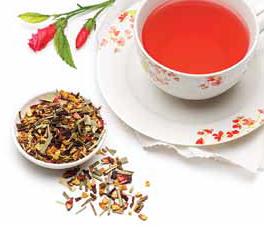 Tell us about how you got into the tea business in the first place?

I was born in Siliguri, a town in Darjeeling district of West Bengal. And if you live in there, it is very unlikely that you are not doing something with tea — it is the biggest industry there. In fact, my father was in the business of tea garden supplies and equipment. And when I was young, I would accompany my father on his visits to the tea gardens during the school holidays. I loved it. Th e huge machines in the estate factories fascinated me. It was nothing less than a big magic to experience how a small green leaf is transformed into such a delicious drink.

After my high school, I went on to win a scholarship and moved to study business at the Singapore Management University. I lived in Singapore for eight years to study and shape my career. During that time, I set up two companies: one catering to e-waste management and another one in the luxury limousine service business. I also spent four years working at KPMG as a corporate financial analyst. At that time, the Indian economy was booming, and I decided to return to India to explore my options here.

I came back to Siliguri and decided to work for my elder brother — who runs a tea export
business. While working with him, I came across yet another side of the business that I had experienced during the course of my association with tea gardens earlier. I identified with the infrastructure of the tea business that was being used to take teas from the gardens to the consumers, and was surprised to see how dated they were. Within these challenges, I recognised a great opportunity to bring about a change, and my association with tea began.

How did Teabox come to happen? What gave you the confidence that the venture would succeed?

My experiences abroad helped me think like an outsider to the industry. Th is approach of an outsider to think about the business was the most important factor that enabled me to wriggle free of the constricting assumptions of an industry insider. It also allowed me to import ideas and practices from other industries and cultures, and apply them to every aspect of the business strategy — including product development, organisation planning and marketing. These skill sets, in combination with my first-hand experience of the tea industry (given my family background), were the driving forces behind the setting up of Teabox.

Tea has traditionally been bought over the counters. What are the positive factors that favour a potential shift toward the online purchase model — for you as an entrepreneur as well as for customers?

All the traditionally large tea companies have continued to operate within the constraints of the legacy value chain. And, even most of the new tea brands seem to be just putting a new spin on last-mile delivery. When we started the set-up, we decided to take the difficult road of turning things on its head — by setting up our presence at the source, by creating a genuine set of benefits for our consumers, by choosing to use technology to reach more consumers as opposed to a traditional bricks-and-mortar set-up. Th is meant owning and operating the entire value chain from the ground up, starting from farm to cup. Th is approach, we believe, gives us the advantage of greater control over the consumer experience, and hence, it will be very beneficial in the long run.

Teabox thrives on the concept of making tea reach from the gardens to consumers within a week vis-a-vis the typical route of auction, wholesale, retail that takes more or less six months. In this perspective, explain the competitiveness of the Teabox model.

The whole journey of tea from the garden to consumers is a long one. To a very large extent, this is the reason for compromising on freshness. Traditionally, tea moves from a garden to an auction house. Then teas are sampled by various distributors and an auction date is set, typically a month after the production. In this interim of a month, tea is stored in poorly conditioned warehouses. Post the auction, the exporter ships the tea to his big importer connections through ships. Tea reaches an importer in about one to two months, depending on the distance and customs clearance. At this point, it is three months past the production. Then, the importer sells it to wholesalers who, in turn, sells it to retailers, followed by the selling of teas to the end consumers. Th is process takes an additional one or two months. So, overall, it takes three to six months for teas to actually reach the end consumers.

Hence, direct and first access to teas, almost as soon as they are produced, gives Teabox a unique advantage over any other tea retailer. Th e direct access to plantations — and thus lack of middlemen in its processes — gives Teabox impressive margins on the business side of things. Our model also challenges the ways of a 200-year-old industry operated until now, which has always relied on a large value chain consisting of multiple middlemen and has hardly changed since the earliest British and Scottish planters who first set up the tea estates. 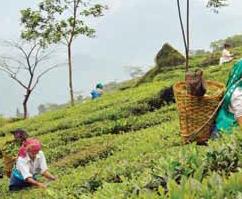 What is the method adopted by Teabox to identify tea quality to sort and store them accordingly?

Tea estates send over their tea samples, which are then evaluated by our expert tea-tasting team. Only the teas which match our stringent standards are selected to be listed on the website. We have also invested heavily in setting up a rigorous, quality checking environment, which ensures that only the best quality leaves are selected and are stored in temperature and humidity controlled facilities. The orders, which ship within 24 hours of placing them, are packaged in opaque, vacuum packaging, protecting them from sunlight and the environment outside during the transit. Regardless of the location, buyers receive their tea packs just within three to five business days. The rest of the teas are stored in a cold storage environment — again, India’s first cold storage of tea.

How many varieties of teas one could find at Teabox? Explain the proposition of buying tea by type, region and specialty.

Our portal, Teabox.com lists the largest selection of single estate teas online — 2,000 single estate teas drawn from tea estates across India and Nepal. Tea is an agricultural product, much like wine. The taste of tea derives from the terroir that surrounds
it. Darjeeling teas have a distinct fruity-fl oral character to them, unlike any other tea in the world. The spring-flush (or spring-harvest) teas, which are typically produced between March and April, have a particularly pronounced flavour and are known to attract record prices at the auction houses every year. Teas from Assam, on the other hand, are generally full bodied, and have a malty taste; they make for great breakfast teas.

Any plans to venture into bricks and mortar format? How does one can access/ buy Teabox products apart from the company website?

Teabox has no offline presence to date. There are many inherent advantages in operating online. For one, our reach is limitless. Right from day one, since we opened the shop, we have been a global company. And we have come far since then – in the past three years, we have delivered 30 million cups of tea to customers across 93 countries. An online business model also gives us the advantage of scaling up much faster without having to worry about the real estate costs. The technology back-end allows us to understand our consumers better, allowing us to recommend them products relevant to them. It also empowers us to create a more personalised experience. For example, we operate the Teabox website in multiple languages, including Russian and Chinese. We also off er customer support in the local language to customers from these countries. Is there a typical demography that you have outlined as your target segment?

Our focus is on customers who are above 35 years of age.

How many offices and warehouses do you have?

We have a warehouse in SIliguri in West Bengal, and an office in Bengaluru.

Are you also getting institutional orders?

No, we have not yet focused on this segment until now.