Given the current scenario of the fashion and lifestyle category, adapting to the ‘new normal’ is the need of the hour. Being a market leader in innovation and excellence, the Donear Group, using NEO TECH® technology, has conceived products that are high quality, utilitarian and have a shield against bacteria and viruses alike. 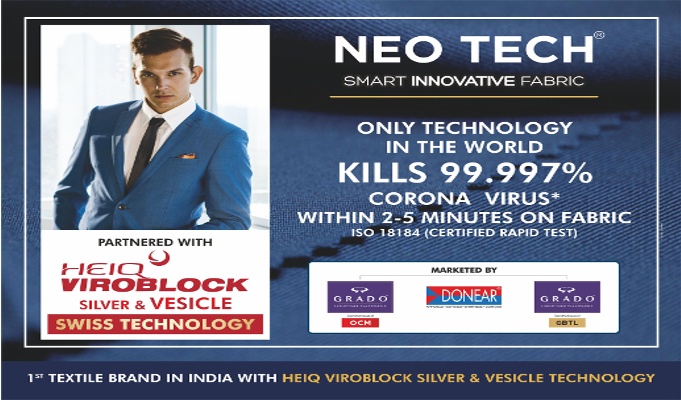 NEO TECH® is the culmination of extensive efforts in research and development; done with the intention of bringing a paradigm shift in the Indian Textile industry. Post the acquisition in 2017 of GBTL (formerly known as GRASIM Suiting) and OCM, the Donear Group formally carved a niche for a R&D wing and that was the advent of the NEO TECH® Center of Excellence.

The group has been a pioneer in introducing a lot of innovative products in the market in the past as well with products such as STREEZA (4-way stretch fabric), ICE-touch (making you 5 degrees cooler) and Uncrushables (for wrinkle resistance) amongst others, which are continuing to fare extremely well. With this step, the group makes a bold advance towards perfecting an anti-viral technology which will go a long way to strengthen their presence in the poly viscose and worsteds categories.

Known for their pioneering efforts, NEO TECH® has partnered with HeiQ, a Swiss company, to power up its suiting & worsted fabrics with an intelligent textile technology – HeiQ Viroblock NPJ03. HeiQ creates some of the most effective, durable and high-performance textile effects in the market today, which lasts upto 30 washes.

HeiQ Viroblock NPJ03 is among the first textile technologies in the world to be proven & certified effective against SARS-CoV-2. Tests conducted by them in Melbourne, showed that treated fabric achieved 99.99 percent reduction of the virus.

The research project involved a disinfection test protocol simulating real-life interaction of small aerosol droplets contaminating clothing with a known concentration of SARS-CoV-2 virus. The virus was contacted with the sample fabric for a few minutes followed by measurement of remaining infectious SARS-CoV-2 viruses.

When the fabric sample was treated with HeiQ Viroblock NPJ03, no infective viruses left after a few minutes and the result indicated a SARS-CoV-2 virus reduction of 99.99% relative to the inoculum control.

Being market leaders in the suitings space, the Donear Group has endeavored and perfected the touch and feel of this fabric which continues to remain as is pre and post the treatment. The selvedge with NEO TECH Antiviral fabrics will become a seal of safety and protection for the times to come.

The group is very confident that the combined power of NEO TECH and HeiQ Viroblock will prove to be a game-changer for the Indian textile industry, especially in the performance fabrics category.

Carlo Centonze, HeiQ Group CEO, says “The confirmation of antiviral activity of HeiQ Viroblock against SARS-CoV-2 is an important milestone. This data forms part of our ongoing efforts to help provide textiles with greater levels of protection against viruses and contribute to efforts towards mitigation of the global pandemic. We are delighted to partner with the prestigious Donear Group and to extend our joint products in the Indian sub-continent. NEO TECH is a highly advanced fashion-tech developed by Donear group and we are sure that we will be exchanging lots of notes between us. What sets our product apart is that it kills the viruses and microbes within minutes, thereby reducing the risk of contamination drastically. The product has been tested and certified by various world-renowned labs including the prestigious ISO 18184 rapid test.”

Rajendra Agarwal, MD, Donear Group) comments, “We have always wanted to extend our forte in poly viscose and worsted fabrics – be it for trousers, jackets or suits. This partnership has added another feather in our cap for breakthrough technology with anti-corona fabrics that shows its effects within minutes rather than hours! I strongly believe that the antiviral fabrics will boost our established group turnover (of 1300cr) by at least 15%.” In a lighter vein, he adds, “This technology makes us best suited for the future!”