Reliance Industries Limited (RIL) had announced its entry into online grocery retailing via a new e-commerce platform, JioMart, in August 2019 and started a pilot for the same in Mumbai in January 2020. Through JioMart, it is planning to offer over 50,000 products and connect 30 million offline retailers with more than 200 million households across the nation, says GlobalData, a leading data and analytics company in India.

The value chain created by JioMart connects local offline retailers on a large scale with its merchant point of sale (POS) solution, where it provides user friendly digital platforms for inventory management, customer care services and other services required by the retailers. JioMart plans to bring in electronics and clothing and footwear under its scope in the near future.

The food & grocery sector is tipped to be the next business battle for online retailers in India. Retailers, both domestic and international, have been proactive in their approach towards the rapidly growing online food & grocery (F&G) sector in a bid to capture a large customer base. 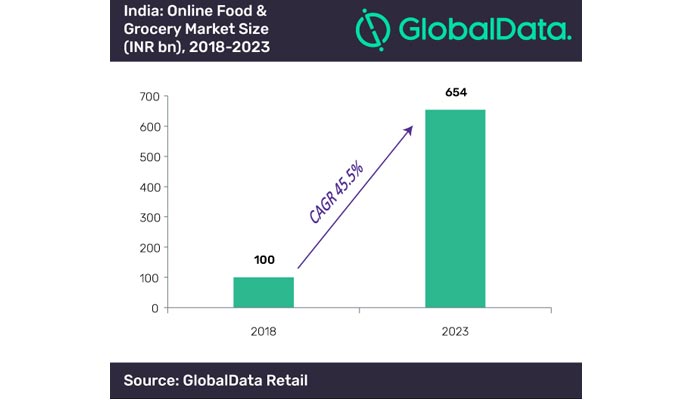 GlobalData estimates that the online F&G market in India grew at a compound annual growth rate (CAGR) of 71.2% between 2013-2018 and is set to grow at a CAGR of 45.5% during 2018-2023 as the urban working population is rising in Indian cities and retailers are venturing into non-metro cities. This growth is also supported by the rapidly growing mobile internet and smartphone penetration.

Suresh Sunkara, Retail Analyst at GlobalData comments: “RIL’s JioMart eyes the massive potential in online F&G retailing, which is estimated to reach INR654bn (US$9.12bn) in 2023. Reliance is known for its disruptive ideas and business approach, and the same can be said for its latest venture, JioMart. With its retail wing in cash and carry outlets through Reliance Fresh and Reliance Supermart, and a massive customer base with India’s largest telecom network in the form of Jio, capturing the market is not going to be tough for JioMart. Being a domestic company, Reliance gets the advantage that Amazon and Walmart owned Flipkart miss due to the new e-commerce regulations to safeguard the interests of domestic offline retailers in the country.”