At a time when big-ticket retailers are scrambling to grab a share of the online pie, and rolling out robust Omnichannel strategies, homegrown handset maker Intex Technologies went back to the basics and decided to strengthen its distribution network with offline branded retail stores called Intex Smart World last year.

What started as one store in New Delhi in April last year has swelled into 75 stores spread across 60 plus cities, the fastest in terms of expansion by any smartphone maker in India. The company is opening a store every fifth day and says that branded retail stores are part of the company’s big picture goals to deliver what today’s digital consumers demand; present anytime, anywhere and through any medium.

“When we decided to open branded retail stores, many asked us as to why are we opening retail stores when everyone is moving online. But we as a company realised that today consumers expect more from retail. They look for education, convenience, services, value and experience at the same time. While being online can definitely give convenience, the ability to experience products is something that it misses,” explains DGM, Retail Business Intex Technologies, Vishal Malik. 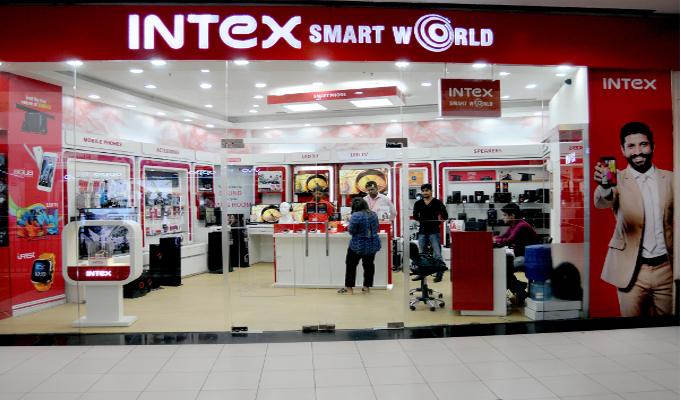 “Moreover, the pre-requisite for any successful Omnichannel strategy is to first have a strong footprint. If you don’t have that then how would you strike a connection between both the worlds(online and offline). Opening stores were the first part, now in next phase we are designing our Omnichannel strategy. We have some robust plans for it the way we had for our retail stores, but it will unfurl gradually,” adds Malik.

The company which was initially known for its computer peripherals and speakers has evolved over the years by entering in categories like mobile phones, IT accessories, consumer durables and wearable products.

Today, Intex is India’s third largest smartphone maker and a widely accepted brand amongst consumers. In addition to these retail stores, the company has a robust distribution network comprising 1100+ distributors and 80,000+ dealers spread across the country. Its products are also available at more than 250 dedicated counters of reputed chains of hypermarkets and specialty stores across the country.

Over the last one year, the company has opened 75 retail stores across the length and the breadth of the country. The company has expanded both in metros and low penetrated small towns with the same store concept, size, and format. “The focus was to provide a standardize experience everywhere,” says Malik. 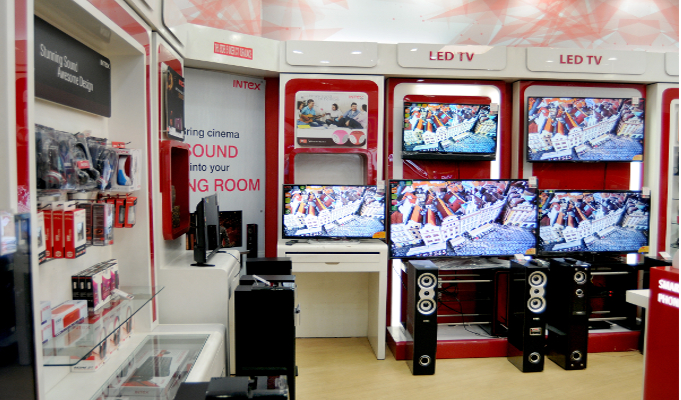 “Intex Smart World was incepted as a ‘fit for all’ concept. Some companies differentiate between the small towns and metros but we feel that consumers are same everywhere, the need and demand is constant in the small towns. Interestingly the ROIs are equally encouraging, therefore we have maintained this standardization. One cannot distinguish between our Delhi store to one in Faroqabaad,” points out Malik.

Bifurcated in two areas: one for sales and the other for experience, tutorials, digital displays, support, and engagement, the smart world stores are designed in a ‘waterfall concept’ where products are displayed effectively, eating less space and giving an opportunity to display wide range. The stores also feature a virtual section termed as ‘We Have More’ which hosts a virtual catalog where consumers can visualize all SKUs of every product available in the store in the real time.

The company clocked a revenue of Rs 6,400 crore in the fiscal ended March 2016. But, it’s too early to share any revenue figures or contribution from company’s branded retail stores, as they are yet to witness all the seasons.  However, Malik says, that the stores have so far received an overwhelming response, both from customers and ROI.

“60 per cent of our stores are already running in profits,” he says. “These stores have changed the perception of consumers, making us a widely accepted brand. The fact that 90 per cent of stores are franchise owned further reflect the potential that our franchisees has seen in us. We have delivered things as per their expectation and will continue to do so,” he adds.

Diversifying categories: A key to riding over competition

Piggybacking on e-commerce boom in India, various Chinese phone makers took India by storm with flash online sales and low price smartphones. Over the last two years, brands like Gionee, Coolpad, Vivo, Nubia, ZTE, Meizu, Huawei among others, have made a significant presence in India’s smartphone market with these companies now targeting their guns at offline presence by spending a huge amount on advertising and marketing their brands like never before.

These Chinese players have put a lot of pressure on the Indian players who are forced to rethink their strategies to fit in today’s rapidly changing needs of mobile users. However, Intex feels that its strong presence in various categories as against one specific category clearly gives them a lead over these brands.

“Today as a brand we are a diversified organisation, we are present in multiple categories. Our branded stores are not a single category focused retail. Thus, giving us a clear edge over the competition who focus on a single category or product,” explains Malk. Intex operates in total 16 categories divided into IT, mobile and consumer electronics, the company plans to come up with lot other categories in near future. “Of the existing categories, mobile phones(smart phone + Feature phones) contributes 35% share, speakers and LED Tvs take 30 per cent each and IT Peripherals & Wearable contribute 5 per cent to the total sales in a retail stores,” says Malik.

Adding that, “Categories not only thwart competition but also keep you business healthy by dividing the revenues across the categories.”

Know what not to do!

“For us ‘what not to do,’ was going over ambitious with the partnerships and their investment. One needs to be modest with the market and be realistic with the plans and goals. And that’s what has kept us going since the start. We have been striving to provide experience to our consumers and are expanding as the market is asking us to,” he asserts.

The next benchmark for the company is arriving on October this year when it plans to take the retail numbers to 150 operational stores, says Malik.

“But we are not stopping after that, we will continue to open stores. We are unfolding investments on developing categories,integrating technology, training our staff and adding value to our stores.”

“The aim is to reach a level where when consumers look to buy any electronic item, he/she should look for Intex and stores,” concludes Malik.